Requiem for an Island Poet:

A price can mak a belted knight,
A marquise, duke, an’ a’ that;
But an honest man’s aboon his might,
Gude faith, he maunna fa’ that!
For a’ that, an’ a’ that,
Their dignities an’ a’ that,
The pith o’ sense, an’ pride o’ worth,
Are higher rank than a’ that.

For the local record, Bill Olson, the bard of Washington Island, died last week. I’m not sure anyone on the Island ever called him that, passionate as he was in words about the place, but to my way of thinking, my understanding of Bill’s writing and love of Robert Burns, there was definitely a bardic quality about him, including his admiration for Burns’ politics and writings…a cry for fairness …liberalism/socialism…the problems of class inequalities.

As local legend would have it (and ‘legend-making comes swiftly to the recently departed in a small town, not to mention a small Island of 600 some people)… word had it that Bill Olson was known to fly his flag upside down whenever he disagreed with the government. True or not— it seems an act in keeping with his Robert Burns’ temperament, worthy of remembering this Island bard’s love of country, sense of individualism.

He occasionally wrote for the small but noteworthy local newspaper, The Washington Island Observer. You can tell a local newspaper is still local and effective these days when it isn’t owned by the Gannett gang of corporate newsmongers hell-bent on destroying American journalism. I know Bill would agree with me on this, since we discussed the state of local journalism via e-mail and phone conversations on a number of occasions, including the sad state of our county rag, the Door County Advocate (-Gannett), reduced to little news of no distinction, ‘journalism’ below the reporting skills of a high school newspaper.

There was no better observer of Island news and ways than Bill Olson, who always had issues worth airing in print for the local reader, the common good. The problem with the small-town-Bill Olson-writers in our bigger world of greater concerns is that we too often take these local folks for granted. Or worse, for fools.

In 2007 Bill published a collection of his columns, PERSPECTIVES OF AN ISLAND CITIZEN, Washington Island-An Amazing Place, Jackson Harbor Press, $10.95) which had all the focus and common sense of local writing at its best. His columns covered everything from meetings on economic development to local musical talent, garbage, education, liberty, taxes, fire/rescue services, etc.…to thoughtful little personal essays like “Amazing?” that begins in self-humor and ends in a meditation on mazes:

Neighbors my be wondering why that crazy Olson is pushing his lawnmower in circles out in the middle of what used to be a pasture of his sheep. It’s amazing.

It’s a maze. My dictionary says a maze is “An intricate, usually confusing network of interconnecting pathways, as in a garden; a labyrinth.” Amaze and maze both come to us from he Middle English word “masen” which means bewildered.

So what’s all this to do with going around in circles in an old pasture? Am I bewildered? Perhaps, but the maze will eventually end at its center with Celtic cross about six feet tall.. Still confused? Aren’t we all? Isn’t life a sort of maze?

Two years ago a poet friend of mine was extolling the fascinating story of mazes/labyrinths. As I investigate further, I found that mazes are used by some Christian churches as prayer paths…Our own Island Stavkirke can be reached by one of two prayer paths which are one sort of labyrinth..

Bill was born in Portage, Wisconsin, 1930, graduated from Lawrence College, served in the US Army (Japan), taught English at Meiji Gakuin University in Tokyo where he married Haruko (Phoebe) Miyazaki. He did graduate work in Nashville and after thirty years in business, retired to a twenty-acre farm on Washington Island in 1989, where he tended to a small flock of sheep, studied Robert Burns, helped others, and established Jackson Harbor Press.

Bill was, by every meaning of the word a ‘good man.’ “Volunteer” was one of the things he did best. The Pottawatomie Lighthouse on Rock Island was a particular passion. He was the kind of person some don’t quite understand or even accept, yet confess “…but his heart is in the right place.”

The “right place” for Bill Olson’s heart was the Island and his love of writing. Which came as natural to him as breathing. I doubt Bill ever desired to become a great writer. He simply wanted to say what was on his mind; what he felt needed to be said. Sometimes suggest it in story, sometimes explain it in essay…sometimes sing it in Robert Burns-like rhyme:

What Do Islanders Do?

In summer visitors may frown
And ask the question of renown;
In winter when things settle down.
aaaaaaWhat do you do?
The jobs you’d find in any town
aaaaaYou’ll find here too.

We’ve stores for food and hardware too,
We’ve teachers, farmers and a few
Commercial fishermen, it’s true
aaaaaAnd many more
Who toil for needed revenue
aaaaaThis side of Door.

We’ve restaurants and building trades
And students working for good grades.
Then as the shorter daylight fades,
aaaaaThat’s when we’re blest
And leisure time our life pervades.
aaaaaWe live with zest.

Some love to ski cross country where
They breathe our clean crisp Island air,
While others fish thru ice and stare
aaaaaAt water clear.
Our many hunters bright orange wear
aaaaaAnd get their deer.

So ask no more what we will do
But rather if it is taboo
To simply rest and to renew
aaaaaAnd contemplate.
We’ll even write a poem or two
aaaaaTo demonstrate

[from NORTH OF DEATH’S DOOR, 1992, with illustrations by Phoebe Olson]

His son, Charles, sent me a photo of his father last week, “polishing the brass on the refurbished Rock Island light.”

That seems a perfect ending for this story:
Bill Olson, a keeper of the light. 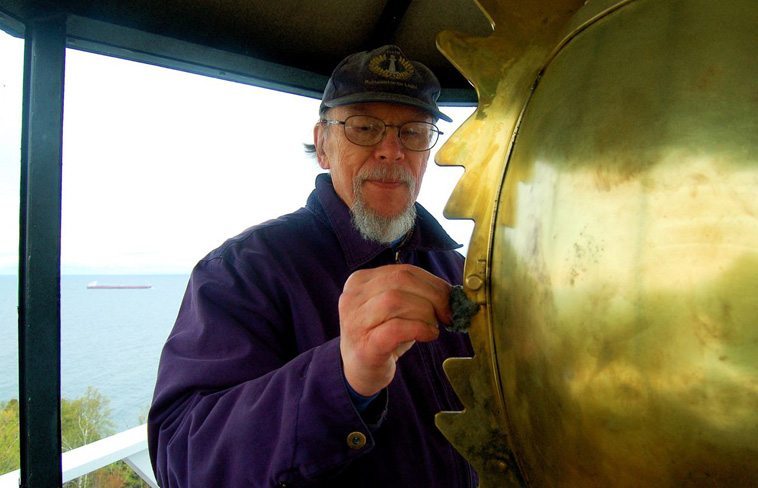 the view (blocked) from the road (after & before)