happy valentine’s day from the ghost of gust klenke 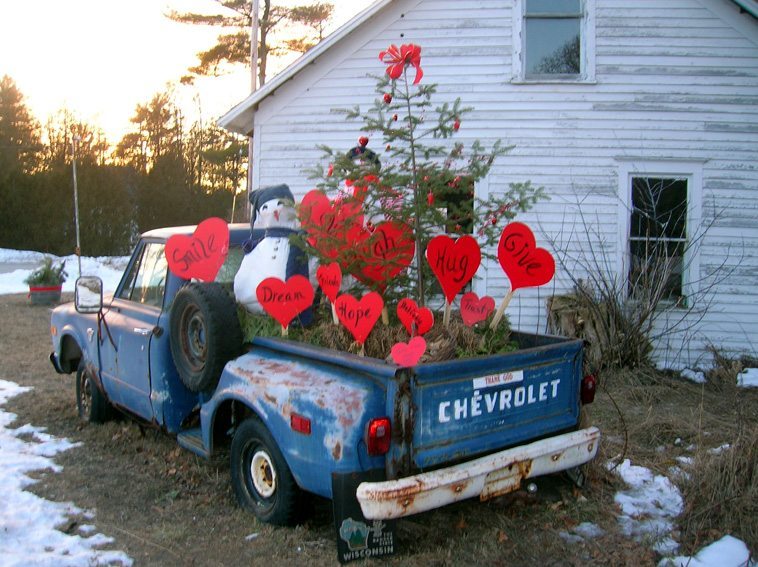 “THE GHOST OF GUST KLENKE”
by
Norbert Blei

The old, weather-beaten, white gas station with the red sign “GUS” KLENKE still stands on the corner in Ellison Bay, minus the red Standard gas pumps with the glass crowns, minus the old oval, orange 7-Up sign, minus ‘ the clock in the window, minus the Atlas tire sign, the Quaker State sign, the two Honey for Sale signs, the air hose, minus the sleeping dog in the doorway, minus Gust. (Thank God no one has dug out the lilac bushes yet.)

It’s become kind of a landmark these days. Though a landmark to or for what, leaves natives and tourists alike scratching their heads, babbling to themselves.

Natives and oldtimers will right away lapse into their own memories of Gust. A visitor or two might recall buying a jar of honey from the man, while others will recall the place simply because “it was always there.”

And there will be those who probably never stopped because it seemed a bit of a local blight in their eyes. Because it wasn’t one of those modern refilling unservice station/mini marts where well-dressed customer-attendants, without a speck of dirt under their fingernails, or a dab of grease on their pressed clothing, couldn’t tell you the difference between a sparkplug and a quart of 10W-30, let alone know how to change either.

But this old falling-down gas station with the old man and all the junk in the dark inside and car parts and tools and beehives and junk all over the place and fiddle hanging above the cash register and the stove smoking and the dog in a dead sleep against the wall and the blue neon clock glowing in the window all night long, and Gust bent over some engine with a wrench in his hand saying, “Yeeeeeeeeep,” and the derelict cars and the old schoolbus outside rusting in the weeds … all this was Gust Klenke, And Gust Klenke was all this.

And we need to be reminded of this occasionally, especially now as the county goes Condo and Cute, and before every vestige of the real Door County is homogenized in the humdrum of urban slick and country fake with shops called ‘The Maple Closet’ and ‘Heaven’s Gate’. 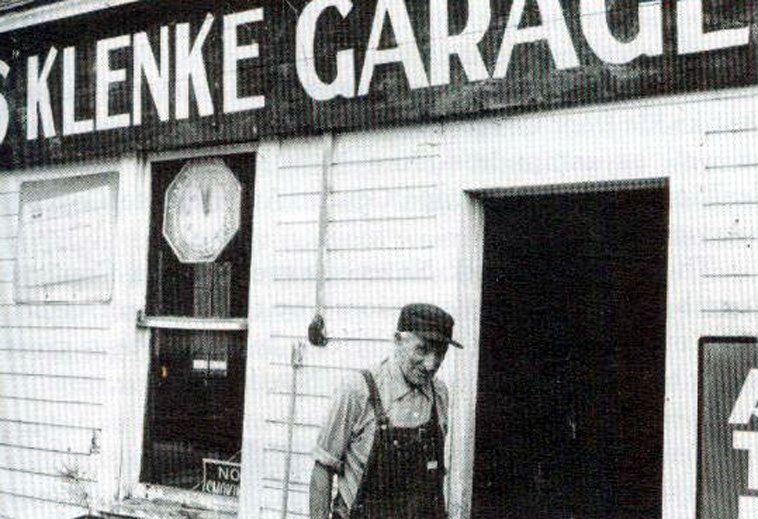 This photo of Gust was also taken by Norbert Blei –20 some years ago.)

So smile, tip your hat, say a little prayer, or toot your horn to the ghost of Gust when you pass by. His place had ‘character’ (still has, what’s left of it). Something almost impossible to find in most of Door these days, as we either tear it down, rehab it into something it never was, or build in the current vogue of Door County Country-Cute-Kitsch. All of which is false, all of which is phony. All of which makes about as much sense as Gust Klenke alive and well, driving a BMW and dressed like a yuppie.

There’s Door County Country-Cute-Kitsch and Door County character. And you don’t have to look too far down the block from Gust’s to separate the real from the unreal. The hustle from what-it-was-like-to-fix-machines-in-a-building-that-wasn’t-trying-to-be-anything-else-than-what-it-was-and-raise-bees-and-gather-and-sell-honey-to-folks-who-stopped-by-because-they-needed-you-and-so-what-if-the-whole-place-looked-like-it-was-going-to-hell, cause maybe it was, and maybe we all was, yeeeeeeep!”

Downtown Ellison Bay still seems a little purer, a little more authentic than what’s been happening in most of the towns and villages of Door these days. Late at night, I like to think of Gust in his dimly lit garage, wearing his grimy bibs, with tools and rags and pencils sticking out of his pockets, his old cap hugging his forehead, bent over, struggling to fix the carburetor on some small engine.

The blue neon clock glows in the window … he opens the door and steps outside, onto the gravel, the smell of raw grass and the scent of summer lilacs . . . and takes a little stroll toward the Viking for his usual cup of coffee.

The street is empty. The town is quiet. A potter has replaced the gallery across the street…the small building where the market once was. The post office is no longer in Walter Severson’s house, but the house still stands, and so too that beautiful white frame house of Clint Rogers and his wife … a family with some history to Ellison Bay.

Will’s Cottages remain the same, thank God or someone for that. The most authentic lodging to be had in Ellison Bay. Rustic and real. The Town Market too, is what it is. So too the Viking, where only a few of Gusts’ old cronies are to be found at the counter these days.

The Pioneer Store… the prize and pride of old Ellison Bay as Gust knew it… and as it still stands in all its glory and history, thanks to Lester and Carol Newman. (Measure any of your Country-Cute-Kitsch shops in Door alongside this one. You’ll recognize them real, real fast.)

No comment on the church across the street. Let that out-of-character design speak for itself. The Norrland looks great. So too Kenny Gobel’s station. Who can explain the Greek Parthenon of Ellison Bay that once wag Clayton’s? Till’s fits in perfectly. So too the abandoned, old Door Reminder… and all the rest down the road, and up the hill, all a little beyond an old soul’s nightly sojourn.

Heading back to his garage, a flashlight in hand, his dog at his heels, the ghost of Gust thinks the old town “ain’t so bad yet, but sure is changing.” He wishes whoever took the blue neon clock from the window of his garage would put it back, leave it there for the local folks, the travelers, the world of Ellison Bay and beyond to keep time by.

That would be a nice-enough memorial, a remem¬brance of old Gust. Leave the station stand till it falls. And leave the light of the clock glowing in the window for all a them that needs to be reminded that time passes for everything and everyone. Though the memory of the real, like Gust Klenke, has a life of its own. Yeeeeeeeeeeeep.

[from CHRONICLES OF A RURAL JOURNALIST IN AMERICA, Norbert Blei, Samizdat Press, 1990 ] 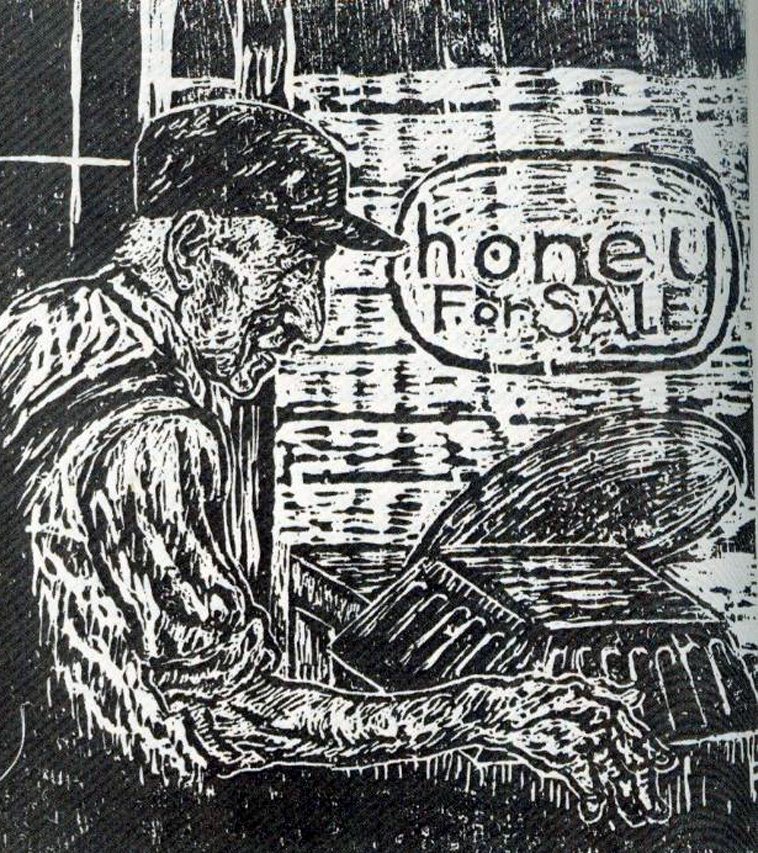