I would like to hit a number of notes with this piece. Today is Earth Day—what better moment to celebrate the life of an old friend, former Clearing student, Emma Pitcher? Then there’s The Clearing itself, where I have taught writing almost every spring since the 1970’s, and where my own life has been considerably enhanced because of the true nature of this place.

I received a call on Tuesday afternoon that Emma Pitcher had died. I had lost touch her with the past few years, but she always came to mind whenever I recalled earlier classes. Which is more frequent that one would imagine.

Always it’s the students. The uniqueness of each one whatever the age or gender. What they bring to a class setting. What I earn from them. Whatever writing spark I may be able to provide for each of them.

There was a hint of the old ‘school-marm’ about Emma that took a while getting used to—for both me and other writers in class. A touch of the scold. The right way and the wrong way from every thing to the choice of words, Latin names for plants, to photographing a flower. She was more than a little bit above it all—in education, intellect, life-experience, seeing/doing things her way. But once you got past this—she was pure gold. Her laughter was infectious. Her intimate friendship knew no bounds.

Her particular expertise was nature: flowers, birds, trees, the whole earth. She loved the Clearing, the Indiana Dunes, the entire Midwestern landscape.

I’ll leave the details of her life for her official obit. Personally, I was aware she was divorced very late in life and this was a wound that would never quite heal.
Only nature—and writing offered any balm.

She came to my class already an accomplished nature columnist for the Kalamazoo Gazette. All I was able to do was suggest she start publishing her columns as books…plus provide some direction through fields of poetry, which would eventually loosen some her prose, give her more wing-span. For this, she was eternally grateful.

I love smart, sincere, real, adventurous, humorous, open women—both young and old. Especially older women with life experience, love of art and nature, and a spirit that can rise to any occasion.

Emma didn’t need the feminist movement. She knew exactly who she was and her place upon the earth. She left her mark in words, in everything she touched, in every friend she made and held fast to the very end.–Norbert Blei 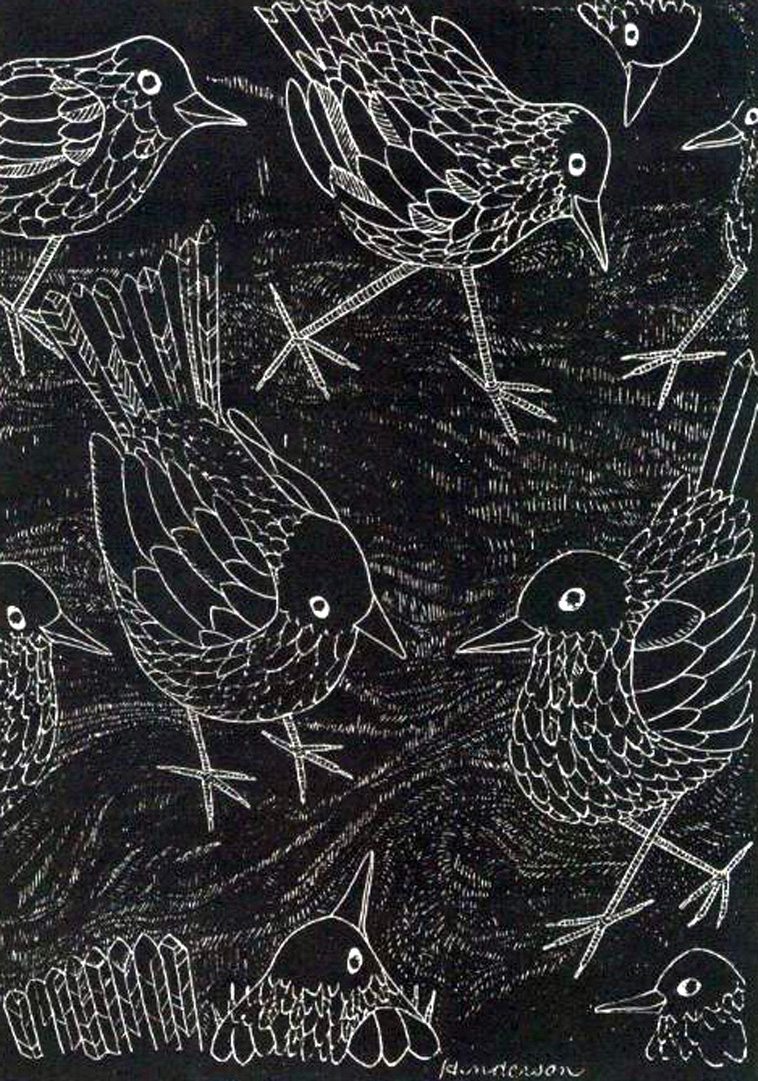 What verbs would you use to describe the move¬ment of birds? We all know a duck waddles because his legs are situated so far back on his body. And a mute swan trying to get his twenty-five pounds airborne has to thrash and thrash the water heavily. What other verbs immediately remind you of some particular avian experience you have had?

The word bounce connotes a sprightly reaction— the thing a tennis ball does after being hit by Pete Sampras or Martina Hingis. I think a saucy-demeanored black-capped chickadee bounces—he levitates in defiance of gravity. Its almost as if there were built-in springs in his legs that make possible his fast takeoffs. Bounce has other meanings relating to bad checks, night club guards, office dismissals, illness recoveries, but I like best to think of it describing the effortless verve of a chickadees departure from a feeder.

Some bird groups explode, really frightening an unaware passerby. Ruffed grouse and Gambel’s quail broods, cornered or threatened, will burst out suddenly from under one’s feet—birds everywhere, flying in a dramatic distraction display.

Hovering is fascinating avian behavior to watch. You wonder if you re seeing things. If an airplane were to try standing still on air, it wouldn’t work; its aeronautical dynamics would be destroyed and it would become an FAA statistic. But some birds—from hummers to rough-legged hawks, including terns, kestrels, and kingfishers—can hover, beating their wings rapidly to keep the same position while checking out a possible meal. Hummingbirds, the most successful of all hovering species, seem to stand still as they suck nectar from a flower, maintaining the position with as many as seventy beats per second, wing beats too fast for human eyes to see anything but a blur. A belted kingfisher poises, wings beating hard; then, when ready to dive, he closes his wings tight to his body and plunges into the water. He may also perch motionless in a conspicuous place, waiting for a meal to appear before he dives.

Eagles may dive from high in the air, making spectacular plunges several feet into the water. Gannets, too, do high dives, fifty feet or more, when in search of quarry.

Thornton Burgess, and other children’s authors who anthropomorphised many animals, wrote of Sammy Jay strutting and swaggering. I think swoop is a fitting verb for him. Many birds approach feeders in short reconnaissance stages, making sure the runway is clear, before making the final approach. But not the blue jay. He swoops rapidly, gulps down one to fifteen seeds, and vanishes, scattering smaller birds willy-nilly.

Pounce is another descriptive but useful verb describing particular bird movements. A robin will cruise around a lawn in dignified fashion, head cocked, but when the right moment occurs, that yellow bill goes after the worm with considerable strength and style. He pounces on it. Similarly, a perched barn owl or great gray owl studies the ground intently, and then, with a graceful whoosh, the bird plummets down, and another rodent becomes dinner. Kestrels on telephone wires have similar performances.

What is it to soar? Is it to float through the air, wings rigid, stiffly extended, body hardly moving, taking advantage of wind currents to maintain or increase altitude? A barely discernible rocking or tilting from side to side helps maintain position. To see hawks endlessly circling in larger and larger arcs as they rise on thermals, the heat currents coming up from the land, is always mind-boggling to me.

Anyone fortunate enough to find adult birds feeding their young experiences perfect examples of begging. With mouth agape and wings flapping wildly, the fledgling entreats a harried parent to feed him immediately. One can almost feel saliva running, so violent is the activity.

During May migration, enjoying a small flowering tree alive with wood warblers—black and white and yellow flashing everywhere—is to experience the act of flitting. We were watching such an enchanting tree once, dashing back and forth, binoculars up and down, shouting excited “oh looks”, trying to get one set of wings in focus, when an unknown cartoonist s prototype of an elderly female birdwatcher in tennis shoes said to us;

“Forget your binoculars. Stand still and just watch for field marks.” Her advice worked. We let the birds do the flitting.

A nighthawk in dramatic courtship display flight booms with his wings as he makes a spectacular plunge from high in the air. The sound is the rapid rush vibrating the feathers.

Birds that spend most of their time in trees generally hop with both feet whether in the tree or on the ground. This is tiring because the entire weight has to be lifted every time. Ground nesters such as meadow-larks are more apt to walk, one leg moving at a time, and the entire weight is never suspended. Brown creepers and white-breasted nuthatches creep up and down and around trunks while woodpeckers hitch their way up.

To see a flight of gulls leisurely beating their way down a wind-driven, sunlit lake is a pleasant sight, evocative of summer days. The effortless flight is the evidence of having a complete set of all the necessary equipment and having it in perfect working condition.

A male ruffed grouse drums with his wings, using the whirring sound to stake out his territory, repelling other males and attracting females. Many birds glide effortlessly into landings, making no body movements, just coasting downhill, wings extended, legs down ready to make contact. 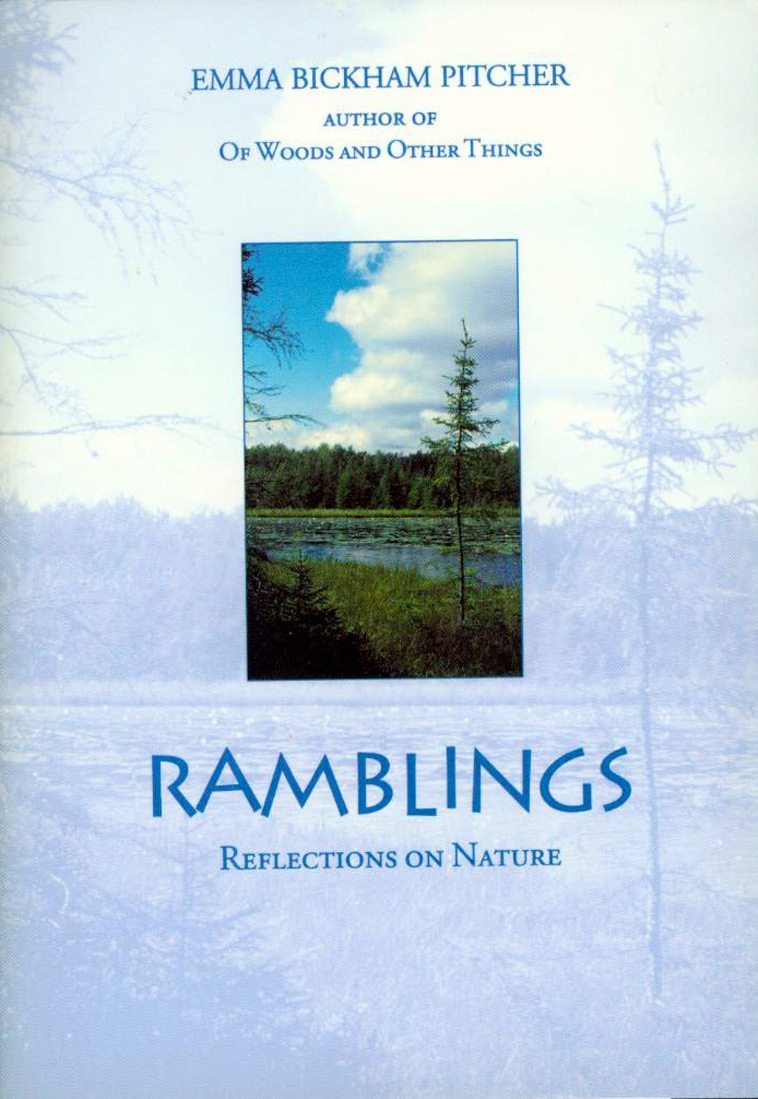 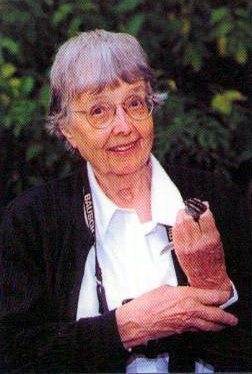 Emma Bickham Pitcher’s serious nature interest started in the early 1950s in the Indiana Dunes where she began bird and flower watching. Moving there in 1980 from Chicago, she wrote and taught about the dunes natural features, enjoying photography and field work. Since 1987, she has devoted many hours to the Kalamazoo Nature Center: studying the trails, teaching and writing. A naturalist at a 180-acre private nature preserve and a licensed bird bander, she took courses at Michigan State University and Western Michigan University.

An Illinois native, Pitcher raised a family and then worked at the University of Chicago. At retirement, she was Dean of Students of the Graduate School of Business. Her writings include Up and Down the Dunes, Of Woods and Other Things, and articles in midwestern Audubon publications. Over the years, various awards in recognition other volunteer activities have come her way, including those from the Michigan Audubon Society, the National Park Service, and the State of Indiana Order of the Sagamores of the Wabash.

the way of old

life in the rural…