notes, clippings…stuff on my desk 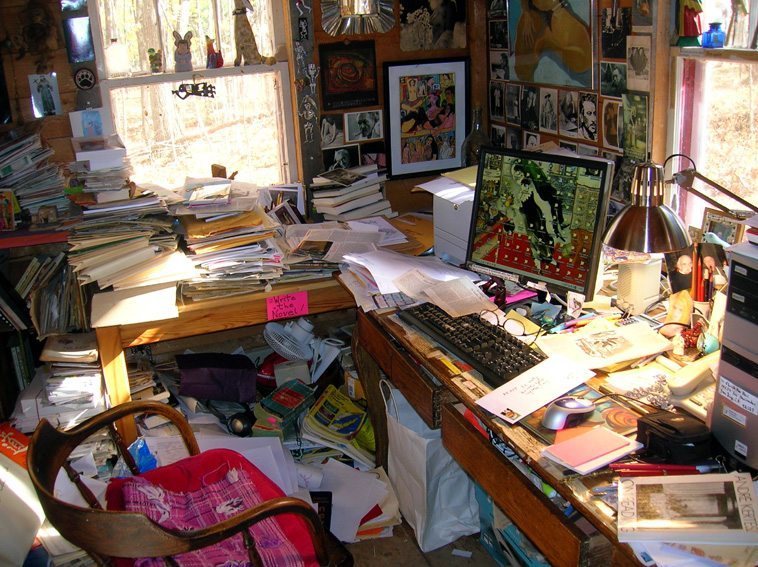 NOTES, CLIPPINGS…STUFF ON MY DESK

I’m an inveterate ‘clipper’ and have been for more than fifty years. I still have manila folder files and file cabinets filled with yellowed newspaper clips, many of them turned to parchment.

My desk is another reminder of a writer out of control. Coop-Chaos, I call it.

Back when I was fighting our hapless local newspaper, The Door County Aggravate (www.bleidoorcountytimes.com, open link to Blei at Large & Co., open ‘archives’ on right). BUT, no! I don’t want to go there again. That battle’s been won, lost. A dead issue, a dead newspaper at this point.

Let’s just say, that one of my suggestions to hold and increase newspaper readership (local, city, national),was they open the pages more, including the editorial, to better writers, better writing, more universal subject-matter that might appeal to, dare I say ‘the soul’ of the reader? Nature alone is a sure thing.

The New York Times succeeds in this area brilliantly with the occasional nature essays (“The Rural Life”) of Verlyn Klinkenborg, who appears right smack in the lead editorial column (always the very last editorial ) whenever the spirit moves him. And when it does, it moves me—and many readers as well, given the daily stench of bad news. A rural refresher. Smell the good air.

I usually get to about the second paragraph of one of his poems, I mean essays, and reach for my scissors. Clip, clip, clip…another keeper. Something else to add to the pile of stuff that surrounds this writer. Inspiration. It helps make the world a better place. At least in our imagination.

How the Thunder Sounds

For the past month, late-afternoon thunderstorms have coasted across this farm with an almost reassuring regularity. After three or four storms in as many afternoons, they seem almost domesticated — an aunt or uncle stopping in for a surly tea but leaving the air surprisingly refreshed in the aftermath. While the storm was building one day, I found myself thinking of new words, a new lexicon, to imagine the march of those storms. As the skies darkened around teatime once again, I could have sworn I heard crumpeting in the distance.

It is late afternoon as I write. There is blundering beyond the tree line. Soon the tuberous blunderheads trundle over the horizon; they begin to “wampum, wampum, wampum” until at. last they’re vrooming nearby, just down the valley. Or perhaps they’re harrumphing and oomphing, from the very omphalos of the storm. Onomatopoeia is such a delicate thing.

But as the clouds tumble into position directly overhead, the sound changes, as does the color of the day. Suddenly the air is grackling, dark and furious in its plumage. The lightning and thunder begin to come as one — ZEBU! ZEBU! — drowning out the wishing of the rain and the concurring of the wind, which turns the maple leaves white-side up. Hail begins to adder on the skylights, and soon the only light left in the world is the sickly green of the storm’s hunkering belly. The roar in my ear is the sound of the gravel road toshing away, worsing downhill and forming a lake on the highway. Water runs in revels and midriffs through the pasture, where the horses stand indifferent to the caucus around them.

And then, just like that it’s over, only a bumbling far to the east, a last snicker of lightning. The sun gloats in the sky, casting a gleam on the pasture where there was so much umbering and ochreing only moments before. The static electricity of the day has been discharged, and with it the linguistic oddness I have been feeling. The storm, I realize, has left me ravenous, hungry as a raven.

I don’t go looking for the places of deep comfort on this farm. They call out to me. Why does the mounded hay in the horses’ run-in shed look so inviting? Why does the chicken house — warm and tight and brightly lit — feel like a place where I could just settle in? I climb the ladder to the hayloft and the barn cat watches me warily from his redoubt in the hay bales. I feel like getting my sleeping bag and joining him.

Night comes, but the fog comes first, dragging the last light with it across the hilltops. The leaves have started to fall — just ones and twos, but already scorched into autumn colors. It is still too warm for the woodstove, the kind of evening that feels like summer in mourning, though without any real sadness. On a night like this, “grieving” sounds like the noise the wind would make if it got into the attic.

Real autumn is a long way off yet, no matter what the pumpkins say. The sight of them at the farm stands seems to jerk me forward, and I am not ready. I want to consume the particulars of the day ahead of me, one by one.

I was away from the farm for two days this week, and it sprang ahead without me. The bees, uproarious around the hive-mouth when I left, are nowhere to be seen in the dusk, though I know they’ll be out again in the morning.

That hive is another place of comfort. I don’t know whether their labor feels like labor or whether necessity is joy to them. I never see the bees coming and going without wondering what so much kinship means. I loved the education Merlin gave the young King Arthur in T. H. White’s “The Once and Future King,” turning him into creature after creature. I teach myself the same way every day I’m at the farm.

It’s well before light, and I’m listening to the rain, watching every now and then the flicker of headlights coming down the hill. I no longer have custody of Ethel the border terrier, so I’m up early on my own.

She was itemized in a divorce settlement and now lives in Iowa, where I know she’s happy. I hope she misses me, but not nearly as much as I miss her.

Without her, the rhythms of the day ahead are different. Somehow there’s more time for the horses, which is perhaps why Nell the mustang let me catch her when the farrier was here. At first she shied away, to keep up appearances. When the other horses had been trimmed she presented herself to my arms, and it was a much more beautiful day after that.

I have new chickens — layers eight weeks old. When they were living under lights in the mudroom as chicks, I made a practice of picking them up, those that would let me. And now when I enter the poultry yard, I feel like a one-man midway at the chicken fair, birds standing in line waiting to be picked up.

No good can come of lifting chickens. I can almost hear my dad thinking that, though he is gone now, too. And yet the birds churr and cluck, and I leave the yard happy.

The chicken house my dad and I built soon after 9/11 has’ begun to sink on one end, thanks to the woodchucks. That gave me an excuse to buy a bottle jack, which I’ll slip under the sill and, with it, jack the house back to level. The place will feel more trim, and it will keep water from running out of the chicken waterers, which will matter once the freeze begins.

It’s hard to explain where happiness comes from when so much has been lost and misplaced and set aside. But come it does. This is one of those mornings when I think I have a farm just to surround me while I work. The chickens will be darting in and out of the rain, the fall of hickory nuts will continue, and the horses will stand around an upended hay bale in the shed on the hill, looking as though they’ve got a game of three-handed pinochle going.

more notes, clippings…stuff on my desk