connecting from the rural world

Connecting from the Rural World

(That was then, this is now)

When I left the city for life in the rural, back in the late 1960’s, I found myself ‘north’ at almost the tip of a long peninsula, on a dead-end road with two neighbors: an old man who lived alone on a back forty adjacent to me (a stone fence separating us) and beyond him, across the road, an elderly couple. All of whom, in time, became good friends.

My connection to the outer world was a cranky four-party line. The three of us on this road—and somebody else, I was never sure who, or forgot …some old lady who never had much to say anyway, on another road nearby.

Sometimes the phone rang—and we all answered. Sometimes you wanted to use the phone, but couldn’t because one of the neighbors was on talking about snow or rain or church—or you.

Occasionally you picked it up just for the hell of it—just to know that another human being was out there, dead end road or not.

And sometimes, indeed, you listened in. But not long! Your conscience always got the better part of you. And you did not want someone saying: “Is that you_____? Are you listening in? Shame on you! Hang up!”

The four-partyline yielded in time to a single, “private” phone connection. Oh, joy, oh joy! All mine. I can pick up the phone any time of the day or night. Dial out! Make a connection to my folks back in Chicago. Friends everywhere.

In time, however, an isolation factor entered in. You missed the close connection to neighbors. Their voices. Their being right there…here.

I think the next miracle was the portable phone. You could actually take the damn phone outdoors where you were planting in the garden or having a beer at the picnic table under the tree and make a call to someone! Or take one. “Hey, I’m outside, talking to you! Yes, the weather’s fine. I’m going up on the roof now to clean the gutters—and taking you with me!”

Well, I’m still out here in the woods, the rural. Trying to make whatever connection I can. Cable doesn’t come this far—and probably never will, in my lifetime. Which is fine. I don’t need or want a 125 television channels. Sometimes deprivation is good for the soul

But I do need to stay connected. Miracle of miracles, not long ago, I was able to finally disconnect from the damned dogged land connection and go wireless! (Enter oh Brave New World—WELCOME!)

Mostly, I’m OK with everything. And sometimes slightly amused, especially in tourist-time summer, when ‘city folks’ enter my rural domain for a spell—some frustrated with laptops that can’t find a signal, some cursing into i-phones that don’t connect particularly well in these parts—the AT&T connection, haphazard, problematic at best.

Which bring me to the theme of this whole piece, this photograph, this scene not too far from me where someone, some frustrated tourist perhaps, threw down his marker…discovered a ‘hot spot’, put up a bench under the tree, a sign to alert the world:

I AM HERE! I AM CONNECTED EVEN FROM THIS DEAD-END-LOCATION! HEAR ME OUT NOW, WORLD! 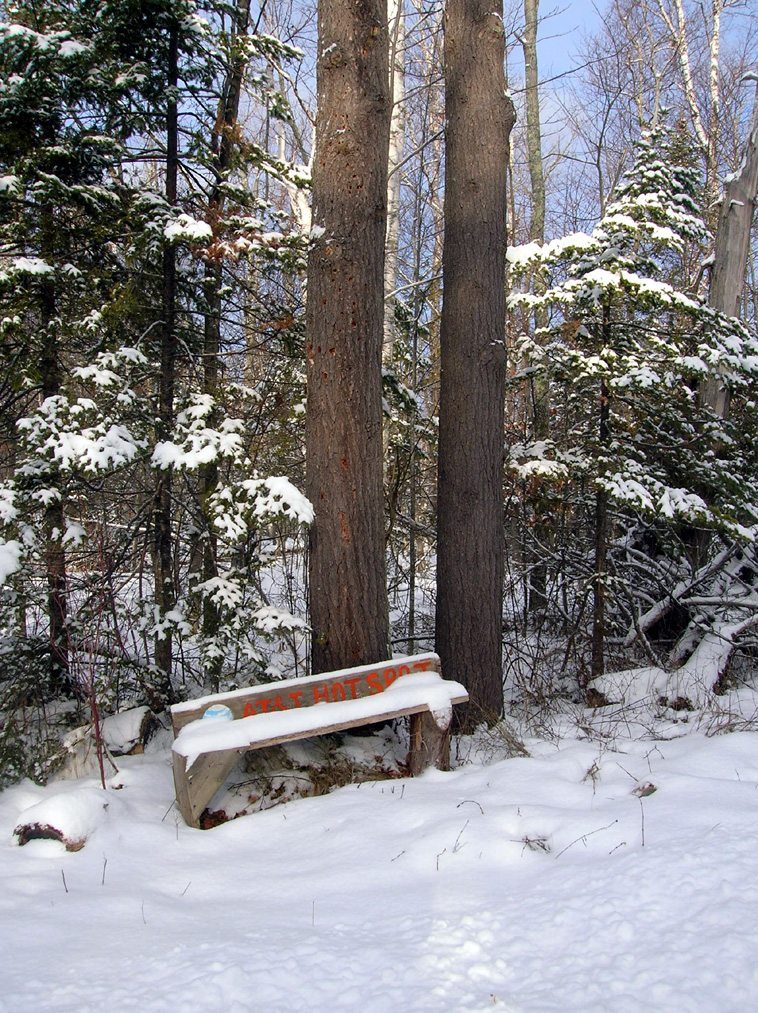