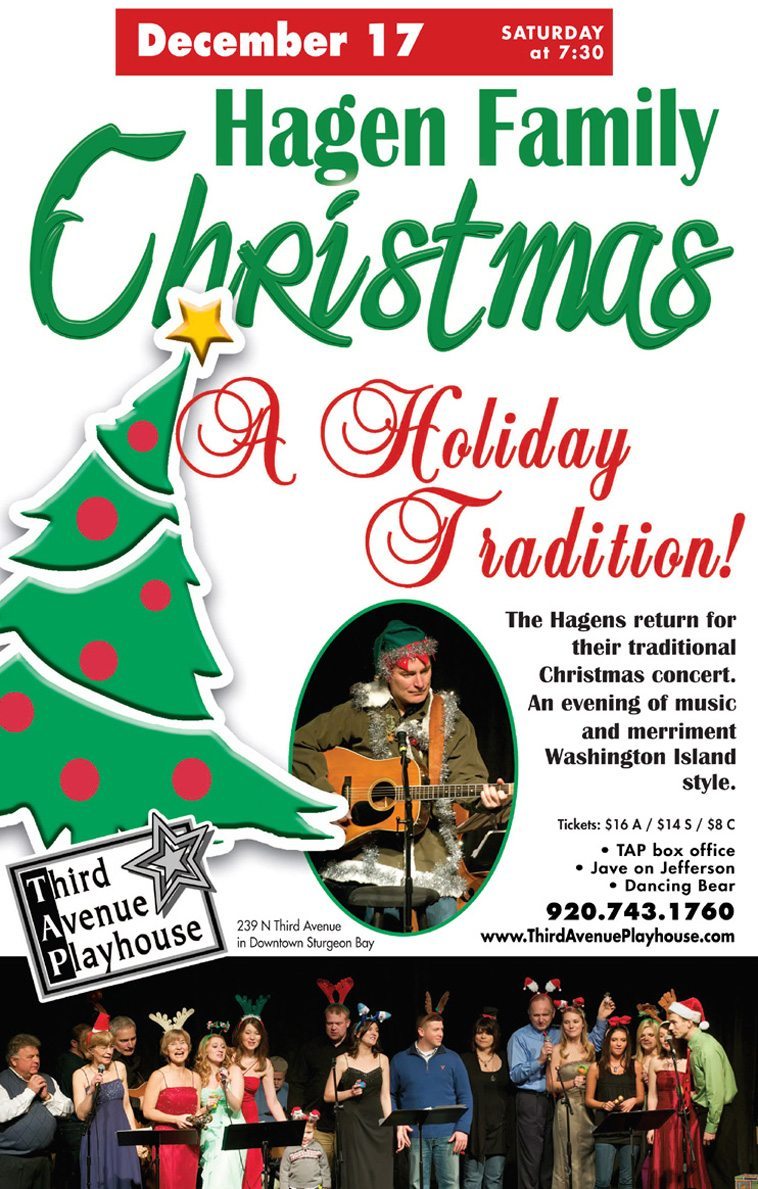 If you still enjoy or remember Christmas in the Big City these days from the distance of Door County, you recall neighborhoods and suburbs coming alive again in sparkling new light. Or you look back with fondness and nostalgia as I do to Chicago Christmases of store windows aglow along State Street, “Merry Christmas” on everyone’s lips…an unusual comfort and love upon the sometimes mean, gray streets…and maybe a slow walk along Michigan Ave. in a soft snow, breathing it all in…the beauty of a city so alive, burning bright.

But there is something to be said as well for Christmas in slow motion…Christmas in the rural, in the small towns and villages of Door County, each one bringing its own small gift of Christmas cheer—white lights, wreaths, a large tree, the live goats on the roof of Al Johnson replaced by lighted reindeer. Much for neighbors, friends, strangers to take in, appreciate in small measure while, passing through. A homemade Christmas.

And while we don’t have the big concert halls and opera houses where city people flock to hear wonderful choirs and Christmas theater productions…we do have the Third Ave Playhouse in Downtown Sturgeon Bay, where every Christmas we get to enjoy a Washington Island family of singers and musicians–the Hagen Family Christmas concert, a holiday tradition for about thirteen years now.

Multi-talented (singer, songwriter, musician, humorist, storyteller, somewhat ‘middle-aged’, heart-and-soul Islander to his very bones), Julian Hagen sort of heads the family these days, since his father, Jack’s passing a few years ago. Old Jack was a wonder to behold upon the stage. A great storyteller. A singer who could yodel too.

“I have so many fond memories of my Father,” says Julian. “He just loved to sing. He was so proud of the family individually and together. I think it was on stage that I felt the most connected to him. We both loved attention! Pop can never be replaced. I think my sisters and I actually share the hierarchy. There are, I think, 21 or 22 of us now, including mates and kids. The stage gets really full. Everyone will be at the concert except my niece, Marisa, her daughter and husband.”

Though the county at this point continues to offer some of the best music of all kinds and some of the finest musicians, singers and songwriters, Julian is probably our one and only, authentic Door County. He knows the territory. Talks the talk. Walks the walk, Writes and sings songs that hum down home.

“The Washington Island setting and tradition is very important to us in this concert. Just like we grew up…we argue…eat, hug, visit, drink lots of coffee, pray, sing…”

I recall a Hagen family story he sometimes tells when a new member of the Hagen family is born…how the doctor slaps the baby…and if the baby does not let out a cry, a song…it’s tossed aside. Not a real Hagen.

As for Christmas on the Island? “Music has always been very important,” says Julian. “Being poor, singing was a cheap entertainment. It got us attention with free meals, helped with self-esteem, inspired social gatherings. We always went Christmas caroling. When I was really young, I would go with Dad to the barn to do chores. By the time we were done, Santa would have brought the presents. I always finished the chores quickly that night!”

There’s a Christmas song he wrote that remains a favorite. “It’s called: ‘Get Up, It’s Christmas’. A choir performs some of the lines (in italics), it begins like this:

Shepherds watched their sheep that night—what happened then
An angel appeared and gave an awful fright—those poor men
He said “Easy now, don’t be afraid.
I bring you good news of where the Savior is laid.”

Readers one and all, in Door County, out of Door County…consider being put on notice: Christmas doesn’t officially arrive in the county till the Hagens sing. Saturday night, December 17th, 7:30, the Third Avenue Playhouse. “An evening of music and merriment” reads the poster.

“My family is comfortable in front of a crowd,” says Julian, “but there is always nervous energy on the loose as well. Jokes, costumes, interactions, and ‘accidents’ will happen, whether starting a song over, running into each other, or babies crawling across the stage. I’ve often said it’s a bit like going to NASCAR. You enjoy the race but you wait, sometimes hope for the accidents!”