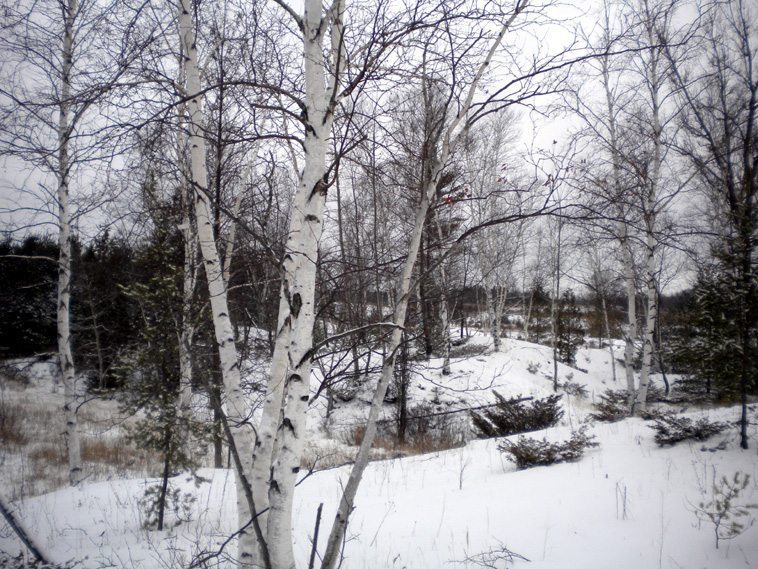 Dance of the White Birches | Photo by Norbert Blei

The writer goes through his notebooks and comes up with February…many Februarys condensed in pages and pages of notes…He puts together that month through the years. How different it seems this early morning as he walked across the slightly frozen, crunchy earth from the house to the coop. Only patches of snow lighting up the ground cover…last autumn’s fallen leaves emerging again…the light in the eastern sky, breaking…a wash of diluted dawn colors, almost metallic. The way it all feels. The way he feels. There will be daylight galore. A cold but welcome sun. Opening the door, he is engulfed by the warmth of the coop inside. He sheds his down jacket, his cap…makes his way to where he now sits…checking the work to be continued from yesterday…responding to email…eyeing one of the many quotes scotch-taped to his desk: “The purpose of life is to be defeated by greater and greater things.”—Rilke. It is 19 degrees above zero outside his desk window, clear skies, no wind, no sound of song birds yet —at least another month before their music begins. He finds his old February notes…smiles, ‘old’ February…not quite today’s February, a predicted high of 38 degrees. That “in-and-out” time of winter. Back and forth. Hope and despair throughout the same day. That brief but beautiful time, he reflects, he watches the day opening in light like a flower…he remembers…

THE SAMENESS OF THE MONTH AND THE SEASON… bitter cold, ice and the unyielding snow. December, January, February are one. The calendar holds no promise. The days of the month are blank. Nameless, numberless, neither black nor red. White. Only white. Winter has vanquished the fields, the roads, the water, fastened everything in ice. Day, snow: night, snow. day. Time is temperature. Frozen.

THEY ARE SPEARING STURGEON… on Lake Winnebago come Valentine’s Day. In daylight and darkness men lean over large rectangular openings in the ice, green water, murky water, lantern in one hand at night, the pitchfork of Neptune in the other, their eyes trained for the prehistoric shadows gliding deeply between water and ice.

A SHIFTING OF SENSIBILITIES… that time of the year when the earth, still blanketed in cold and snow confronts an alien, warm wind wafting over it from the southwest. And the earth relents momentarily, expires, rises above itself and mingles in a prayerful haze. While over the pearl, violet horizon, the sun struggles to free itself from bed linens of clouds.

BREAKING THE BACK OF WINTER… the feeling that somehow this is evident in mid-February. The numbing temperatures are gone. The mercury rises to the high teens, the twenties, the thirties…. A warm freshness to the air. The spring-like call of the chickadee. The sound of the woodpecker drumming tree trunks in the early morning. The meltdown: roofs, roads, earth has begun. Even the sky opens to welcome the sun.

RAIN…for the first time this year, three-quarters of the way into February. To hear again, for the first time, the sound of rain drops…the window glass of the coop, weeping. The earth coming back to itself.

SUN AGAIN/SNOW AGAIN… the contrariness of February, unsure of itself, especially in its later days, as it quickly fades into March. What shall I be today? Warmth and melting snow? Sun and the temperatures climbing into the 40’s? Rain. Maybe unexpected rain…the slightest hint of spring. Or fog. Fog would be good, rising from the snow fields, drifting across the highways at night stealing the light and motion of automobiles picking away at the moveable wall of white. No. Enough. It is winter yet. A show of strength. A sky wrenching, wind lashing blow of snow from early in the darkness of morning into and all through the day. Snow, snow, snow, snow. Blowing and drifting snow. Snow falling and rising. Squirrels tunneling to their storehouses. Birds fighting the windblast to the feeder once last time. Snow, unending snow. The silence grows deeper and deeper. February will not be forgotten. The sky weeps. The old man sleeps. Even the graveyards disappear. Death has no dominion in the hidden world of white.

THERE ARE SUNDAY MORNINGS IN FEBRUARY COVERED WITH LAYERS OF SNOW… temperature near zero, wind as sharp as broken glass when I back the car down the snow-banked drive, head down the icy roads into the heart of a Sunday winter day so alive and anxious to engage on all the back roads. With any luck, the sky is the color of pewter and a light snow is falling. With even more luck, the sun, the color of a large dollop of lemon has broken through and scattered its blinding brightness across the field and through the naked woods. The quiet, unforgiving wind blows an angular, steady, thin layer of snow across the icy road like a floating stream—armies of buffeted frozen flakes blindly on the run, this way, that way, up the road, down the road, around the road…wherever the wind dictates. I know where I am headed. Which county road, especially, desires my inspection on mornings like these. Restlessness in the midst of deadly silence. WHITE transforming the barnyards, fences, machinery…rounding all the angles. I drive till the road disappears. Till the morning absolves me in all things that are transient, still, white….

I LIKE THE FEBRUARY DAYS THAT START OUT LIKE SPRING… but by afternoon return you to gray wooly skies, biting wind, the confirmation of cold.

I COULD LIVE FOREVER LIKE THIS… driving the rural back roads, that nobody knows, where nobody goes…notebook beside me, ideas brewing like fresh coffee…to savor it all. To be alive, alive in moments when everything is both possible and uncertain. But beautiful. To go on driving through all of this. Drifting above the road. Over the very land itself. Over it all, Chagall-like blue, white. Eternity in the imagination of desire. 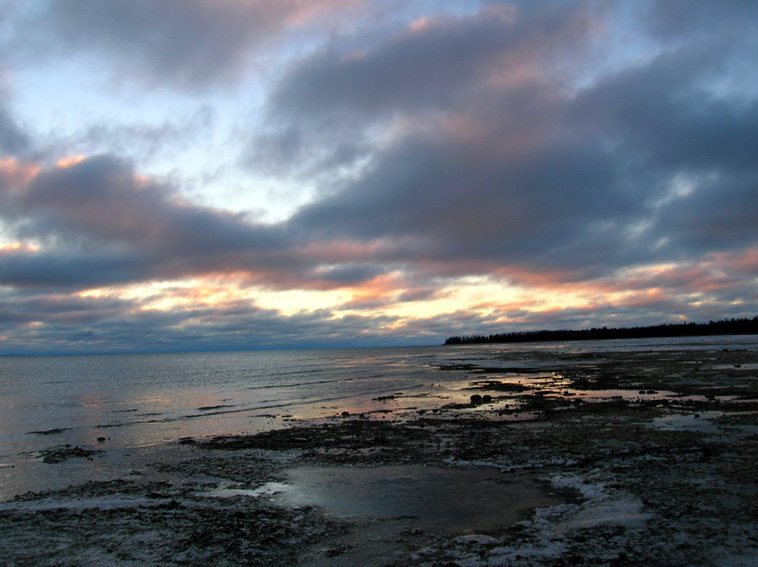