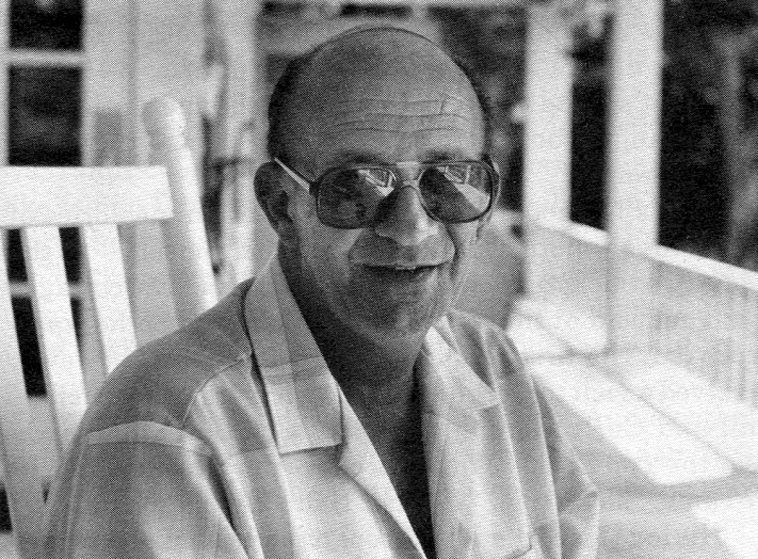 It’s difficult at times to separate a man from a place. I always felt that about Tom Amberg and Sister Bay, where I first met him at the counter of Al Johnson’s many years ago. Summer was not summer without his appearance the last week of July, the first week of August every year.

I would walk into Al’s (newspaper and mail in one hand, briefcase in the other), take up my position at the end of the counter—ready for anything, anybody who came my way, including Al, always within sight and sound, and there one morning would be Tom—occupying my spot, chatting it up with anyone, everyone. The heart of summer had arrived.

Dealing with a host of health problems, Tom was forced to abandon his beloved ‘Sister’ in 2002. No one but his wife, Judith, knows just how deeply he felt this loss of place in his life. He died on May 31, 2011.

I had breakfast this morning with his wife…who continues to return to ‘Sister’ every year. All the simple memories they both shared of just being here, mindful of what Liberty Lodge once was—an old fashioned ‘vacation’…just being here/there, their rental cottage on the shore, the dock, the water, the sunsets…everything perfectly in place.

These days, alone, she retraces many of his rituals, including his quiet early morning drive to Europe Lake, where Tom would always slow down past my coop, pause momentarily, and then proceed to the end of the road, the water’s edge, where he held something like a morning prayer service. Thankful to be alive, back in place.

I wrote a piece about him over twenty years ago (below). And will write another (in memoriam) in the fourth and final book (in progress) of the Door Way series. Rest in peace, my old friend. Rest in peace. – Norbert Blei

The label ‘tourist’ has both good and bad conno­tations. But rarely does anyone entertain the idea of an ‘ideal tourist’. I think I have found such a man.

His name is Tom Amberg from Mt. Prospect, Illinois, and the summer of 1989 marks his 40th season as a visitor to Door County, a lover of Sister Bay.

That’s 40 years of summer vacations spent in one particular location Tom Amberg still calls ideal: The Liberty Park Lodge in Sister Bay. That wonderful white frame building, an evocation of Door County past, that sort of gently sits there in all its tranquility as a reminder to us all — tourists, transplants, locals — of the way things were. The way Ephraim (the once white village) used to look. And parts of Fish Creek. The kind of architecture and mood Door County was once famous for, when people left the frenzy of the cities to come here to rest for two weeks. Not shift into a vacation-frenzy mode.

Door County was geared to that kind of re-creation. The white resorts like Liberty Lodge beckoned the tired, the restless, the harried to a two week summer routine of sitting in the shade of long white porches, basking in the breeze off the bay … lemonade, rocking chairs, snoozing time . . . and a view of the sun setting over the waters. What a day. Nothing happened. Simple pleasures.

Simple times. That’s what Tom Amberg recalls ever since his first visit to ‘Sister’ (as he calls it), to Liberty Lodge in 1949.

“I think this is one of the unique places in all of Door I County,” he says from his view of the white porch of Liberty Lodge, with the sun glittering the waters of the bay. “Anybody who comes here sees it. They may think there’s something better, but there’s not. This is ideal for family.

“I remember in those days the most important thing was family. You did not have to do all this hopping around like today. In those days you sat yourself down here and made these wonderful lifelong relationships. Almost from the beginning people became friends. There was no urge to run to restaurants or saloons . . . the feeling of being tired of staying here all day with the kids and wanting to do adult things.

“In the afternoons, the adults would set up their tables for the evening cocktail hour. You forgot you had an automobile. Not like now, where people can’t wait to get dressed and get out. The Beach Road Store was a very important store. The whole triangle … the Lodge for the dining room, the lawn for the get-together, the store for having the food we needed. Each cabin took turns being the host or hostess for providing refreshments. You didn’t feel like you were in a cottage and isolated. In fact, you felt more comfortable, and you spent more time with people than you did with your neighbors back home.

“In those days too, they served meals in the Lodge. Again, the idea — enjoy what you’ve got here. The bell would ring from the front porch, and you could hear it even if you were out on a boat. It was the Liberty Bell. They were ready to serve. And you were greeted by the staff. That absolute comfort of being somewhere special.. . white linen and silverware. One big room, all white — the old, white hotel dining room. Everyone would be attended to at one sitting.

“This was important because it was another event of bringing all the families together for dinner. We would have that second cup of coffee and exchange stories. We were strangers but not strangers, even though there was another home.”

Tom’s boyhood, Door County vacation memories of his family — mother, father, sister, and himself — at the Lodge, go back to 1949, two weeks in July (“The cottages could get cold at times … no heat then”) when he was 9 years old. His first recollection at the age of 7, however, involved a visit to Gordon Lodge with his dad, who helped Phil and Curly Gordon build the dock that still stands near the Top Deck. “That was one of our first stops when we came,” says Tom. “To visit Dad’s dock at Gordon’s.”

His love for Sister Bay through the years is something else again. I have never heard it referred to as “Sister” before, or with as much fondness. “It starts with Liberty Park Lodge, here in Sister Bay. That was the magnet. And as I grew up here summers, I was able to go further and further into town. The real key the past 20 years has been the people, and specifically, Al Johnson. I have absolute admiration for him. I see in him something that has been more than just the Scotch tape that has held northern Door together. I see in him the pure ‘innkeeper’.

“I do not look at this as a vacation, but as a commute to my other home, where I have the chance to log in some quality time, especially since my bout with cancer. The quality of life is very important to me. I consider this (Sister Bay/Door County) all alive. It’s a living thing. Just as I like to be nurtured, I want it to be nurtured”

I approach this all as cross-fertilization. I want something out of it too — not a material thing. I want to give something, not just take something physically away. I want to add to it.”

Tom’s love affair with this place takes on an added dimension in the fact that he met his wife Judy here on July 24, 1974. (“I was married before. I went through a very difficult thing called divorce.”)

“That’s really one of the reasons we come back here. It’s almost more important. A week ago we celebrated meeting here on the dock 15 years ago. The staff gave us a cake for our ‘anniversary’. This is what we consider our true anniversary.

“I remember there was a lady sitting on the dock and it looked like she was reading or writing. She was actually reading the book, DOOR WAY. How does one strike up a conversation? It had been a long time. I grabbed a bamboo pole and walked down to her. And I made believe I had a worm on the hook and threw it into the water. And I we talked for two hours — me simulating fishing. Later on we laughed how I never once got a nibble. That was 15 | years ago. A year later we were married, and we came back here one year later.

“She changed my life around. Up till then I was a slam-bang businessman. Another different value system I grew out of this relationship.

“We drive around every night up here and pick out the home we will buy. BUT, I don’t want to buy into Door County. I want to buy something that’s already here. If I build on a new lot, then I’m just joining that whole other group I’m not fond of, that just keeps building and building. I don’t have to have land ownership to feel that I’m part of Sister Bay. Lots of people have houses, but not homes.

“I stay at Liberty Park Lodge because it’s one of the last vestiges of the old inn, and I do not want to see that disappear.

“Door County needs to take a nap. To set its perspectives right again. To reflect on who it is. What it’s all about. To give the living nature a breather — from people use. The land itself needs to rest a little bit.

“I’m saying, who cares about the reasons why the season is up or down? Take a look around. Who am I? Why am I here? Do I need the extra 30 rooms I planned to add on? Less business, so what? I’ve been coming here long enough to see that you can still sustain yourself and have a nice life for yourself by building from within, not without. Your quality of service.

“The bigger something gets, the less control you have of the whole business. My dad taught me that. He always kept his business small because he had control — and more profit. You don’t need BIG to be a success. The difference between men and boys is the price of their toys.”

[from CHRONICLES OF A RURAL JOURNALIST IN AMERICA, Samizdat Press, 1990] 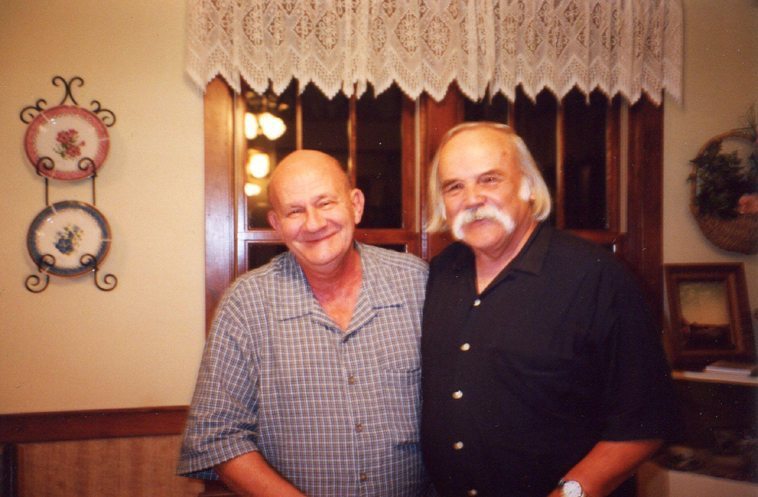